The history of Ceylon tea ironically begins with coffee, and reveals a complex and compelling story of how a little island has come to be world renowned for its premium quality tea. Sri Lanka, known then as Ceylon, was under British rule since the year 1815. Its possession was considered vital but the cost of maintaining military presence and infrastructure necessary to secure it was prohibitive. Coffee was seen as the solution to managing the financial difficulties of managing a colony.

Edward Barnes, arrived in the island in 1824 and around the same time, a tea plant was brought to Ceylon by the British from the highlands of China and was planted in the Royal Botanical Gardens in Peradeniya for non-commercial purposes. Further experimental planting of tea had begun in 1839 with tea plants brought from Assam and Calcutta through the East India Trading Company. Edward Barnes is said to have laid the foundation to ensure that coffee planters have access to all the resources and this lead to overall development of the areas where coffee was cultivated. 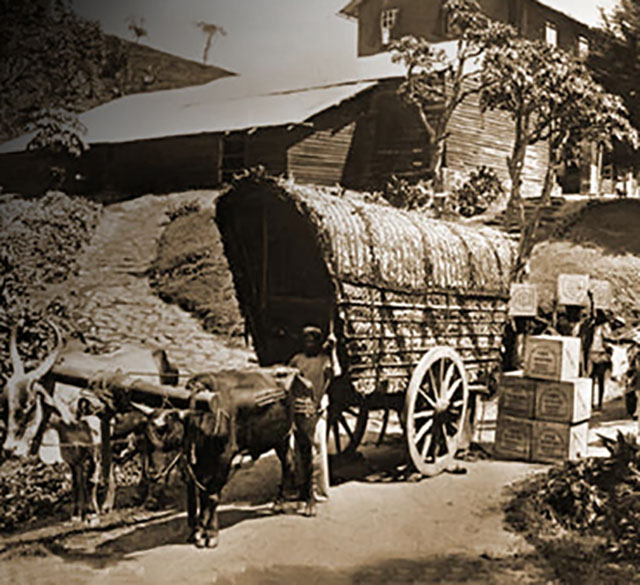 The first public Colombo Auction was held at the premises of Somerville & Co. on 30 July, 1883, under the auspices of the Ceylon Chamber of Commerce at Colombo.

Taylor eager to experiment with tea, soon set up his own tea ‘factory’ in 1867, probably the first in the country in the verandah of his bungalow in Loolecondera Estate.

Rapid expansion of the Ceylon's tea industry in the 1870s and 80s brought a good deal of interest from the large British companies, which took over many of the small estates.

The export of tea today is one of the most important sources of foreign exchange for the country and accounts for 65% of revenue from export agriculture contributing in numerous ways.

The year 2017 marks a significant milestone in the timeline of Ceylon tea, a crop that saved an economy from the brink of bankruptcy. It has wooed and charmed its way into the courts of royals and treated the taste buds of some of Hollywood’s leading men and women. The cuppa has endured a 150 years and will continue to refresh and rejuvenate its connoisseurs for a 1,000 years more.

Today Ceylon tea has become the front-runner of the industry and was much loved for its unmatched quality and variety. The alchemy of land, sun and rain in the Paradise Island of Ceylon, as it was known then, presented the ideal climatic conditions for cultivation of tea. Ceylon added a new dimension to tea by producing variations in taste, quality, character and appearance, largely based on terror of the region. Ceylon tea with its distinct taste and character became every consumer’s favorite cuppa.

Ceylon Tea with the golden Lion logo signifies 100% Pure Ceylon Tea packed in Sri Lanka and is renowned as the finest tea in the world and the first to become Ozone friendly. The export of tea today is one of the most important sources of foreign exchange for the country and accounts for 65% of revenue from export agriculture contributing in numerous ways to the country’s economy. The industry employs over 2 million people, both direct and indirect and is the world’s fourth largest tea producer.